Eagle does not lend itself to unusual, possibly artistic, board outlines copper tracks, silk screen etc. There are a number of Eagle ULPs (user language programs) that can import DXF files, and yet more which import bit maps as a mass of polygons, but I struggled to get any of them to work, or simply balked at the number of fiddly steps required. Basically: it was just too hard or error-prone. Then I stumbled across an article by Shabaz Yousaf complaining about the same problem but pointing to HPGL (Hewlett Packard Graphics Language) as a solution. He provides a C program to do the conversion but: a) I wanted to make a ULP for ease of use and b) I wanted to add some configurability at run-time. This article outlines the approach I took. I am assuming that images are created from the outset in Inkscape but Inkscape can import many formats, so it should be possible to use it on existing images, and any graphics software supporting HPGL output should work (HPGL appears to be very simple, but it may be the case that other software creates HPGL in a way my code does not recognise… so your mileage may vary!).

The latest version is in my GitHub ULP repository (direct link to ULP). Please report bugs via GitHub if possible. Also any friendly guidance; this is my first ULP. This is available under an open source licence.

It should be fairly self-explanatory to use after a bit of messing about. Note that the wire (or polygon boundary) width auto-changes depending on the layer that is chosen. Adding more layers is easy by editing the ULP.

Some notes on usage:

Note: if you now do a “rip-up all”, your imported wire gets ripped up!

Hints and Tips for Inkscape

I recommend setting document properties to give mm as the default units (File > Document Properties). 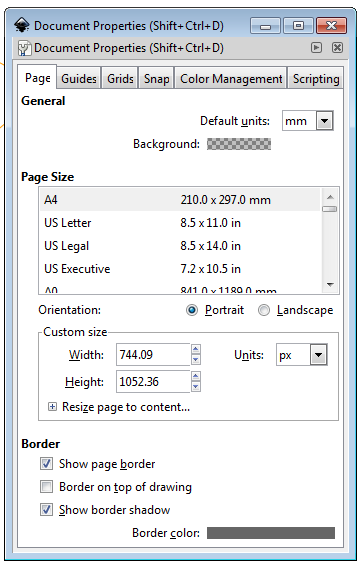 Note that the inkscape image elements MUST be saved as paths (vectors) to export to HPGL. Use the Path menu: Path > Object to Path. If your image does not appear in inkscape check this first!

Simply “save as”, selecting the HP Graphics Language file type.

The thickness of the lines in inkscape is irrelevant; the HPGL just follows the path.

If you want to be ambitious and to compose several different elements (board outline, various bits of copper and silk) in a single inkscape image you will end up using layers in inkscape. Use a separate inkscape layer whenever the HPGL import parameters will differ (e.g. Eagle layer, wire vs polygon, wire thickness). Make all inkscape layers but one be invisible and export to HPGL, ensuring that the “Plot invisible layers” checkbox is not checked (see the “HPGL Output” screenshot above).

The import will probably be best done with the “absolute” positioning. It would be possible to import “off-board” and to move the elements into place, but positioning will not be easy to replicate in eagle. The trickiness arises because Inkscape uses the top left as origin (0,0), whereas Eagle uses the bottom left. This is easily fixed by checking the “Mirror Y-axis” option on export. Make sure that the image is right down in the bottom left corner so that ends up in roughly the right place in Eagle.

Here is a quickly executed (and slightly wonky) LED star for a “magic wand”. This followed the approach mentioned above of using 2 layers in inkscape. The inner and outer stars were positioned and sized using typed-in values in inkscape and imported one layer at a time with absolute positioning. The imported copper wire was re-named to GND (I had already named the net in the schematic). 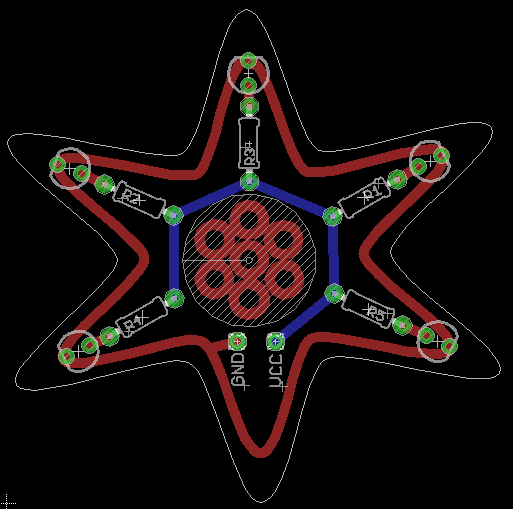 It look about 20 minutes, including some time forgetting most of the hints I’ve given!

The problem of panelising PCBs created using the free version of Eagle and gerbmerge is described in an instructible but I found a couple of issues when creating gerbers for Seeed Studio. This outlines the issues and my approach in brief; it is mostly a public note to myself to remember what  to do next time. The account that follows assumes the guidance in the instructible is followed by default.

The issues stem from use of the “.BOR” and “.GML” gerber layers. Seeed’s instructions do not mention BOR files and they do say that the board outline should be in a GML file, which is supposed to be the milling control. My guess is that if you do not send a GML file, Seeed will use whatever is in the silk layer to guess the board outline. My board had some milled slots for a power connector.

Start the CAM processor and open the CAM file provided by Seeed. It would be silly not to!

Click the “Add” button to create a new job section. Change Job|Section to (e.g.) Board Outline and change the output device to GERBER_RS274X. Style should have only “pos.coord” and “Optimize” ticked. Change the file name to %N.BOR

That defines the .BOR file that gerbmerge needs to lay out the panel.

Save the file (with a new name) and execute the CAM processor. Here is my variant CAM file: Seeed_Gerber_Generater_v0r95_DrillAlign + BOR and GML separated for gerbmerge ONLY.

Note that this should probably not be used for creating gerbers for a board that will not be panelised because the GML file does not contain the board outline as Seeed request.

Note the existing lines “BoardOutline=%(prefix)s.bor”, one for the merged output and one for each sub-board. These stay as they are.

If there is any milling (check by looking at the GML in a gerber viewer, if you don’t already know), add “*Milling=%(prefix)s.GML” on a separate line in each of the sections where “BoardOutline=%(prefix)s.bor” appears.

Make sure the line “OutlineLayerFile = %(mergeout)s.OLN” does not begin with a “#” character.

Note that if there is no milling, is should work fine to rename the merged output OLN file as GML.

Otherwise… a bit of cut and paste hackery is needed to get the final merged board outline and the in-board milling into the GML file. Copy the section from just below the line with only a % character to the end of the OLN file and paste this into the merged GML file just below the same point, making sure that the last line from the OLN does not get merged with an existing line in the GML.

Now check all the panelised gerber files in a viewer!

This information is provided without warranty; if your boards come back wrong its your fault, not mine.